Today was a day where I volunteered at my kiddos school for several hours and knew I would not be successful trying to warm things up.  Because of this, I planned on just bringing a breakfast and lunch bar and a snack and my shake. 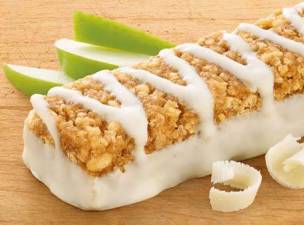 For breakfast, I was in a gym with a bunch of kids and just drinking water and decided to have my bar before the kids started their run.  I think that was around 9 AM.  I’m not a fan of bars mostly because I like substance and bars feel like they don’t let me eat long enough, I guess.  I think I have this unknown thing in my head that if I can eat it in less than 3 minutes, it wasn’t a meal.  I mean, I should be glad.  That’s about the time most parents get for meals when you have kids running around, so I should be thankful I can get it down fast.  I dunno.  I just feel like I want more time to chew food or something.

Overall, I liked the bar though.  It wasn’t too terribly sweet for me (but I do have a pretty good sweet tooth).  It was rather ‘pasty’ tasting…meaning, just drink water after because it can make your mouth feel dry. But, good taste.

Around noon, I went back to my little shop and was going to make my shake real quick and then run over and have lunch with my little girl.  I left the shaker in the car instead of in my bag. Part of me debated going to get it. But that would require movement and I was tired already.  Part of me debated dumping the shake into the itty bitty teeny tiny hole in my water bottle and then I had this vision of chocolate powder all over the floor and being cranky, so I opted not to do that.  I had my lunch bar in my bag and the buttered popcorn snack. 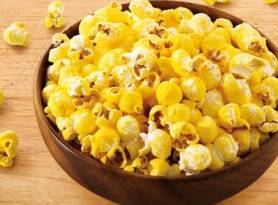 I ended up having the buttered popcorn for a snack and would eat lunch a little later.  I’m not a fan of popcorn (hell, by this day in the blog, it sounds like I’m not much of a fan of anything except really bad food. It’s not true, I promise) but this was pretty good.  It was pretty powdery (like the butter dust or something) and something about this popcorn made me wonder how they get fiber and protein in there.  I might have wondered if they sprinkle Metamucil on here as a way to get in fiber.  I mean, it’s tasteless, right?  But, it was good.  I will warn you, by the end of the bag, those little crumbs can cause death.  Don’t bother trying to lick the bag (not at all admitting I did this) or trying to get every crumb because they can actually choke you.  It’s pretty dry and your body is a pretty smart little machine knowing that dust (buttered or not) doesn’t belong in your esophagus.  But, on a taste scale, I would recommend this snack.  Just do have water for the end because as with all popcorn, it does get dry.

I went to have lunch with my daughter who was in tears because I was 10 minutes late and I spent time picking corn kernels off her pizza (for whatever reason it looked like she dropped her food and it all mixed together which got to my OCD behavior of food touching).  Then, helped her eat her pizza and decided I was going to eat her 8 pepperonis she didn’t eat.  I also snagged a very small bite of her pizza to try it and was pretty pleased that I wasn’t all nom-nom-i-want-more-now mode.

I had not had any vegetables by this point and quite frankly, everytime I got hungry, I thought about how much I should eat veggies and then just decided I’d rather starve.  I think I saw some show about a girl once who only ate french cries and literally cried when she ate other food.  I remember thinking “This girl is ridiculous.  Just eat a salad or a burger.” (Said the red head who is having a gag reflex for eating veggies.)

I know. I’m a hypocrite.

Anyway, after picking up the kids, I stopped by Buc-ees.  If you live in Texas, you’ll know how hard this is for a Texan to not pick up BBQ sandwiches or other things. I mean, it’s like religion to eat there you stop.  But, I got the kids their food for dinner (yes, at a gas station) and picked up a cup of veggies (carrots, tomatoes and celery) for me.  I opened the kids food in the car and payed homage to the little tater tot covered in cheese that looked me wantingly. I mean, this thing actually said, “Eat me.  I want to be in your belly.”  And y’all, I resisted.  I grabbed my little cup of veggies, said a few cuss words in my head about having to eat healthy and then out loud said to my son, “I’m going to sit up here and eat my sad veggies.”

I should not say this because I want my kids to eat veggies.  My kids love spinach and seaweed and things like that.  Thankfully, they have their daddy’s amazing palette.  Daddy eats all kinds of food, veggies included.

It had some ranch in there and I knew that wasn’t a good choice, but I lightly dipped them in it to cut the veggie taste.  I ate a whole cup of the veggies and then I ate less than 1/4 of the ranch cup, which I thought was good for me.

When I got home, we picked up the house before Daddy got home and the kids were doing homework.  In the meantime, I decided to make my dinner.  I had not had my lunch bar yet and I knew if I didn’t eat, I was going to regret it.

So, here’s my other MRE.  I warmed it up and I sprinkled a very small amount of shaved parmesan cheese on it.  Overall, not great – but let me say not great as in, “this isn’t eating out at your normal Italian restaurant.”  But, it’s not bad, either.  It’s manageable.  Much more than my first terrible experience with the BBQ seasoned chicken (which, I do want to try again, with a multi-grain roll).  See, progress you guys. I’ve gone from “I hate this food” to “I’ll try it one more time the right way.”

I haven’t eaten well at all today. I’ve missed 3 veggies and lunch and a shake.  It’s kept my calories low, which just means my body no doubt thinks I’m staring, which means I will store every single thing I ate today instead of burning it off.

I don’t feel any different and I still haven’t done my measurements, so I need to get on that.  I’ll make a commitment to do that today (Day 5).  Because I know there will be days I don’t lose anything but inches.  (I mean, the scale hasn’t gone down, it actually went up .2 pounds yesterday.) . See, for me, that’s the discouraging thing, too.  If I watch that scale every day, I’ll lose hope in the system.  I think I’ll stick to weighing in on Monday’s or something.  That may be better for me – at least motivation wise.

I’m now evaluating Organifii, Morning Complete, and Super Foods.  What greens do you drink to get your veggies in?  I need to find a replacement for mine.

Leave a Reply to Week 1 in Review… Cancel reply

Because we’re all recovering from something.