Thanksgiving was a special time this year.  Silas has become very interested in space, the planets, stars, telescopes, and all things space related.  A while back, his grandpa bought him a Zhummell Z114 Telescope which I promptly messed up the collimation on and got connected with Kevin Cobble at Z Field Observatory in Princeton, Texas.  From there, I started ordering lenses and started exploring lenses through Svbony and working with Rita Hu, who has pretty much convinced me that Mac and Astronomy don’t go hand in hand.  (Though, I’ll never give up the quest!)

Now, I think I’m the one who’s becoming massively interested in space, too!  We have the perfect viewpoint at our house for dark skies, great views of the moon when it comes out, fantastic views of Andromeda, Vega, various planets, and more stars that I’m starting to learn names of.  You can even see the Milky Way band from our place!

Every year, we take a vacation at some point to Galveston.  And every year, I talk about wanting to go to the Johnson Space Center while we are out there.  This year, I decided to book a trip and I wanted Richard’s dad to go with us – as he loves space as much as we do.  I found a cool event to have lunch with an astronaut and as God had aligned, he put Clayton C. Anderson into our lives that day.

Before Silas went, we even talked a lot about what questions he would ask and to write them down before he went.  I booked the lunch with Clayton for my husband, father-in-law, and Silas.  I knew Elysha would not be able to sit through it so her and I had lunch in the common area at Nasa.  (Which, by the way, I recommend the grilled cheese sandwiches.  They are out of this world. [See what I did there?])

Clayton did not disappoint.  He fascinated my husband so much that Richard went and heard him speak again right after the lunch.  (After my husband pushing me to go instead of him and my insisting that I was not going because I wanted them to have this time together.) . I do gotta admit.  I’m sad I didn’t get to see Mr. Anderson!  Richard and Silas haven’t stopped talking about the amazing lunch conversation!

Clayton even autographed the kids books (and Silas’ hat).  Silas hasn’t taken off that hat yet!  He loves it so much.  He wears it when he gets out of the shower and I guarantee you if he could wear it to school (sorry, uniforms, kiddo!), he would!

Clayton wrote 3 books.  We bought 2 there at Nasa, but sure wish I would have gotten the 3rd one while we were there and signed.  I’m going to buy it anyway, but I just won’t have that signed copy from Clayton.  Maybe one day if our paths cross again!  His dates in Dallas for his book signing already passed, so darn it!  I can’t recommend these books enough.

Seriously, go pick yourself up a copy of each of these.

A is for Astronaut is more of a children’s poem book with amazing factoids on each page. 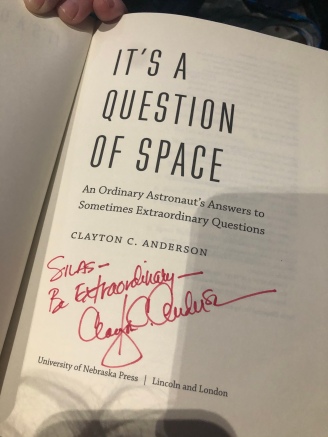 It’s a Question of Space is a book that literally answers questions he’s gotten over the years and written answers to.  I am literally IN LOVE with this book.  It’s got so much information and answers so many questions I had, too. Silas was so excited to read it, he was reading it while waiting in lines at Nasa for the tram tour!

The Ordinary Spaceman (the book I didn’t get…sad face) is about Clayton’s life.  You see, Clayton isn’t some out of touch guy.  He’s ‘normal’…like you and I.  He’s funny.  He’s kind.  He’s great with children.  And he responds.  He takes the time to talk to people, which is so amazing.  Especially to an 8 year old boy who loved that attention and is now hyper focused on space!

Go now, pick them up!  You can order them here.  These are great Christmas gifts!  I’m picking up some extra copies for our teachers, too!  (Especially since they have Space Day at MCA!) And visit his website to learn more about him!  You can find him at http://www.astroclay.com or by clicking this link or visiting his Facebook page at this link.

To Clayton:  Thank you.  You’ll never understand the passion you put behind our son.  He’s a little guy who strives for attention and sometimes, self-worth.  He wants so much to find his place in this world and I’ve always been convinced God has a special task for him.  I pray the fire you lit in him stays for the rest of his life.  Thank you for taking the time to meet with him, to respond to his request to sign his hat (the highlight of his day next to meeting you), and for responding to his teacher (via my Facebook page).  From a mom’s  heart, it meant so much to watch the light go on in my little man’s eyes.  Thank you, a million times over.

What we learned at Nasa:

Wow, where do I even begin?  I have SO many pictures to share!

Nasa has a cool museum setup at the Johnson Space Center.

As you drive in, you can see a life-size replica of the Independence shuttle on top of an airplane.  I mean, it’s surreal. 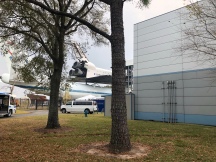 When you walk in, you get to visit so many different little projects.  Light bending, cool gravity experiments, a quick 30 minute show of what it’s like to live on the ISS, lots of fun museum items…like what it looks like when space debris hits things (man, that was impressive), Mars sections (more on that later), and even replicas of the Apollo capsule.  Which, man…when you’re standing next to it, it’s huge!  Not to huge with all those people in it and gear, I’m sure!

But, the real cool part is the tours.  We didn’t get to go on the Apollo Mission Control Tour – maybe another year.  But, we did do the Astronaut Training Facility tour which gave us access to the Space Vehicle Mockup Facility and access to the Saturn V.

The Saturn V Rocket is the rocket that carried the astronauts to the moon on the Apollo capsule.  And you guys, it’s literally breathtaking.   Before you get there, you have to walk past Little Joe (another smaller rocket).

We got some cool pictures of the kids sitting in one of the rocket engines and one of the wings that had some charred stuff on it.  It’s a real reminder that this stuff burns up in our atmosphere and the risk our astronauts take to do space exploration. 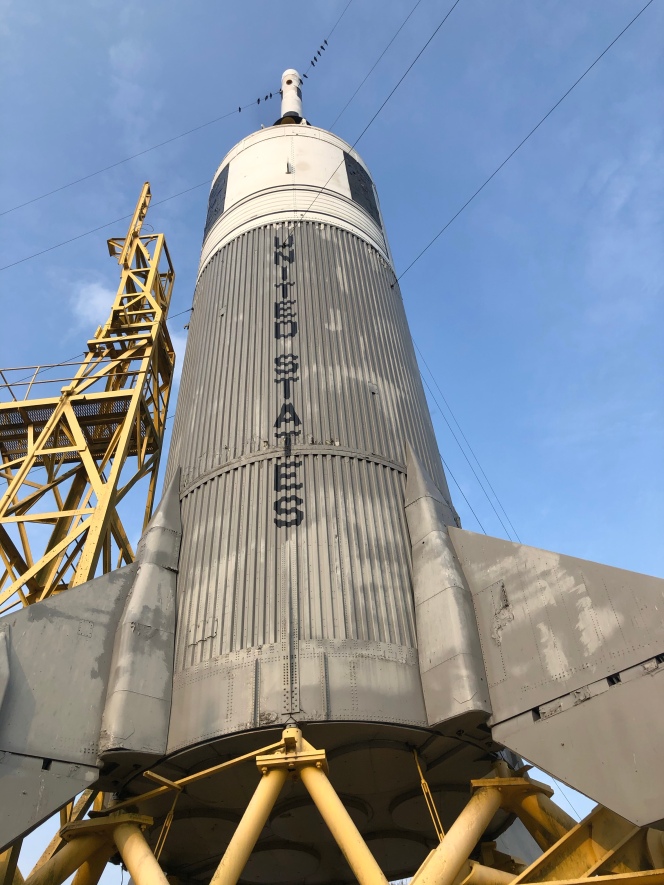 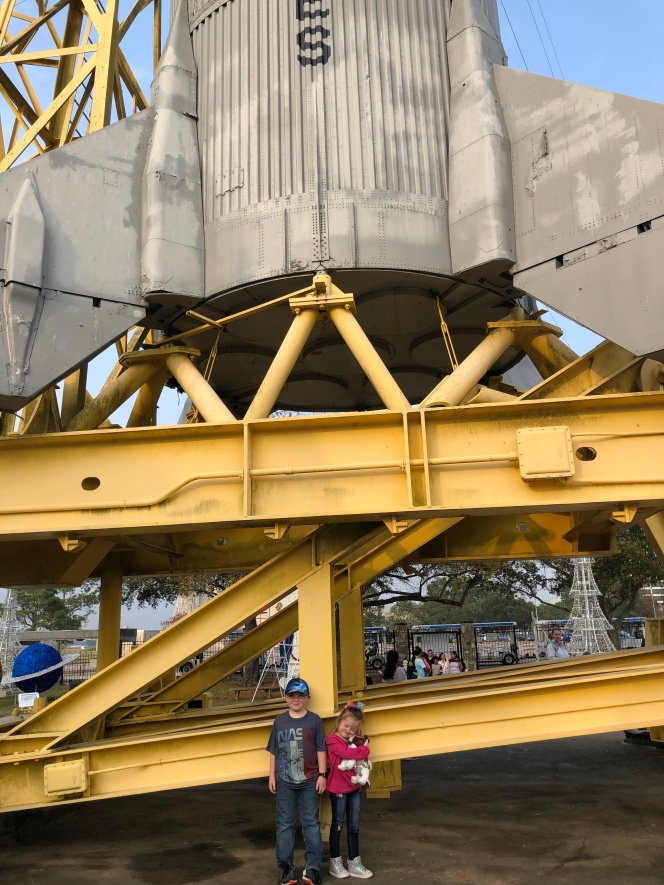 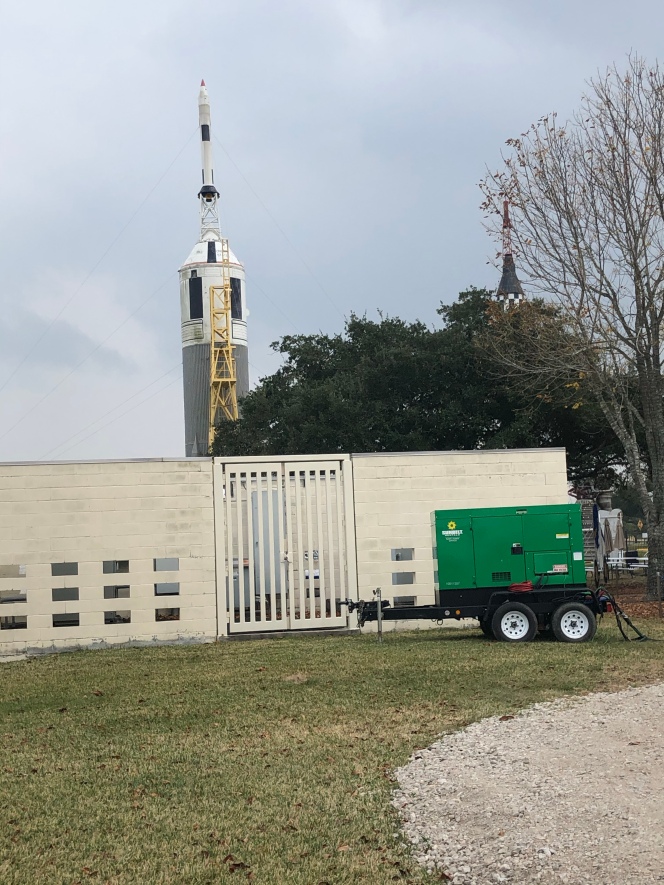 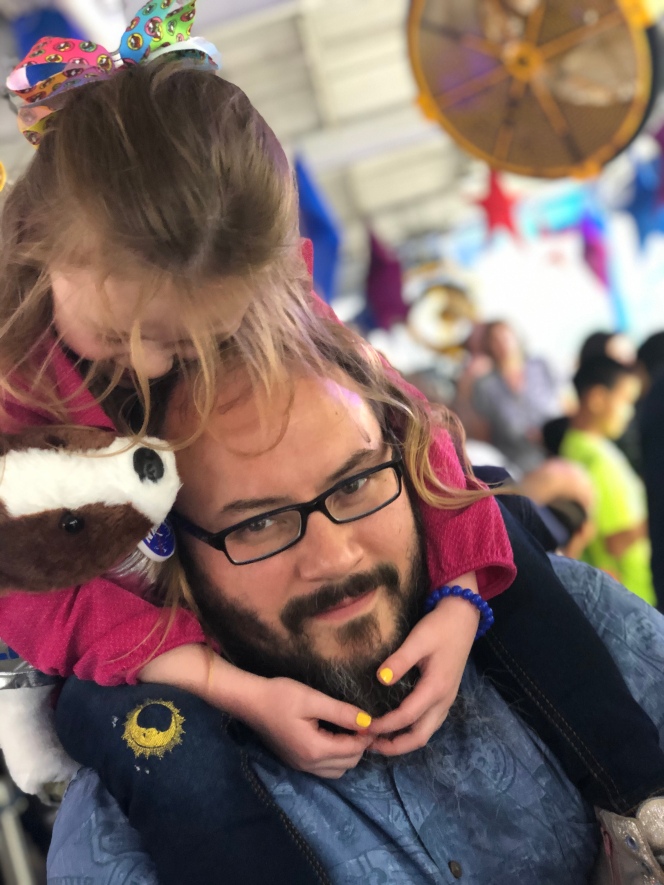 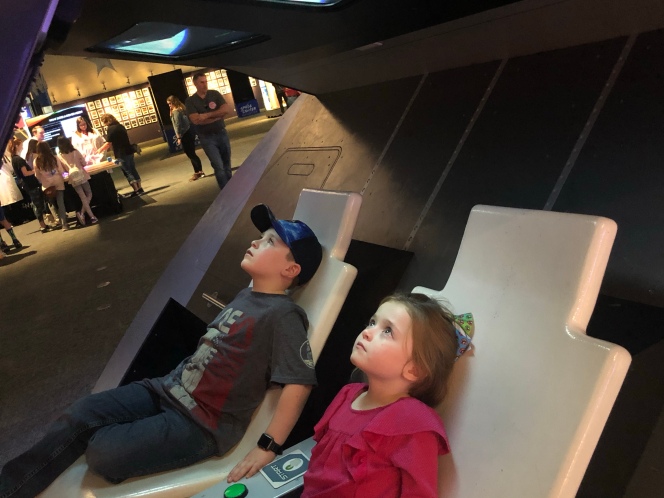 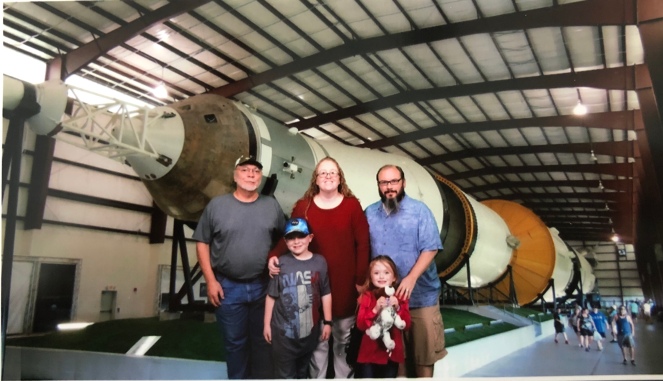 We’ve been watching A Year in Space, which follows the Astronaut Twin Study with Mark and Scott Kelly and watching not 1, not 2, but 3 rockets carrying payloads of meals, water, and experiments blow up is sure a real reminder that there’s a serious danger being strapped to a rocket filled with I can’t even count how many gallons of rocket fuel.  The chance they take to get to the ISS is real.  And yet, they go.

Then, we got to see the inside of the Saturn V rocket barn. 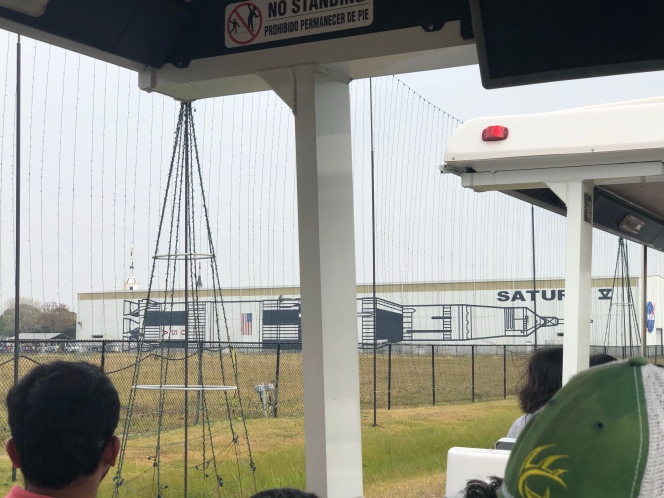 I literally had to catch my breath.  It’s beyond words. 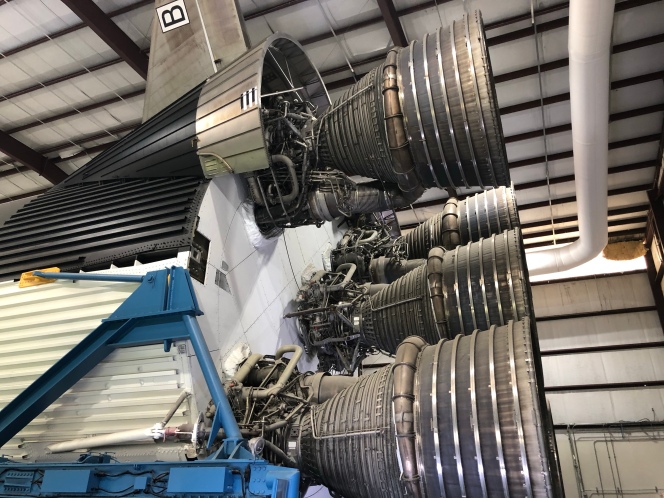 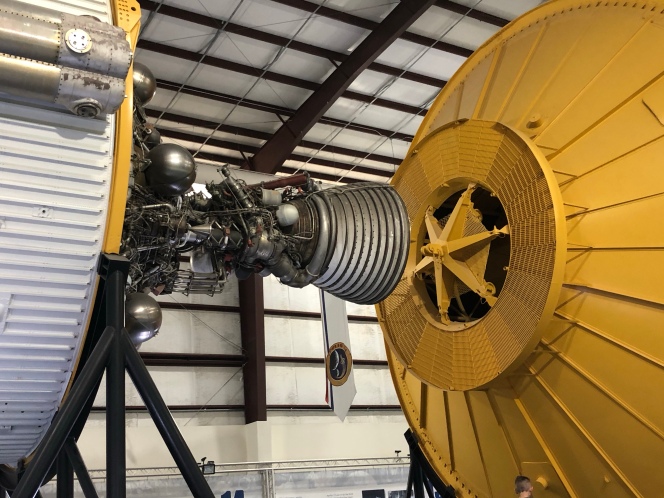 The size of this thing and realizing it’s basically one giant tank of gas and an itty bitty teeny tiny living space on top was just mesmerizing.  I’m a pretty sentimental person.  I get over emotional at things like our military, our police and fire units, and I’ve added astronauts to this list.  Before this trip, I don’t think I had an appreciation for the danger of space exploration.  The sacrifice involved.  I just thought “Oh cool, the space station is in our sky tonight and I can see it overhead.  There’s people in there.”  What I didn’t think about is the fact that it can up to 2 days to dock a moving target in space to the Space Station.  Astronauts drink their own (filtered) pee for water.  There’s no blood on board if you need a transfusion.  You’re not feeling the weather.  The rain, the wind.  You are breathing the same air.  For months.  You are with 3 (but up to 9) people.  For months.  And then there’s space debris.  The protocol to protect you and jump in your hatch if it comes close, the danger of travel back to Earth and seeing the plasma outside your window and putting your life in the hands of some very smart people that you aren’t going to burn up too…Guys.  Seriously.  Amazing.

But, then, there’s the ISS.  Inside the Space Vehicle Mockup Facility is a life-size version of the ISS, the new Orion capsule, Valkyrie (the Mars Robot), and all sorts of cool Mars crawlers.

NASA is going to Mars one day, too.  And it’s really happening you guys.

They have built a robot named Valkyrie.  You can find more on her here.  She’s even got her own Instagram account where you can follow her progress!

I had an amazing time.  I love looking up at the sky and seeing all that God created and knowing astronauts are flying around out there.  I mean, there’s so much more going on in space, but when you think about the delicate balance God created – preventing major catastrophes  from hitting Earth and obliterating the human race, carefully balancing the sun to create an ideal temperature, using the moon to pull the tides.  Space is amazing.

If you ever get a chance, book a trip to the Johnson Space Center.  And keep an eye out for Clayton Anderson and any opportunity to meet him.  You’ll be so glad you did.

Until next time, y’all…